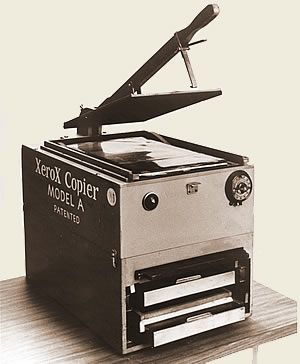 Haloid introduced the first commercial xerographic copier, the Xerox Model A, in 1949. The company had, the previous year, announced the refined development of xerography in collaboration with Battelle Development Corporation, of Columbus, Ohio. Manually operated, it was also known as the Ox Box. An improved version, Camera #1, was introduced in 1950. Haloid was renamed Haloid Xerox in 1958, and, after the instant success of the 914, when the name Xerox soon became synonymous with “copy”, would become the Xerox Corporation.